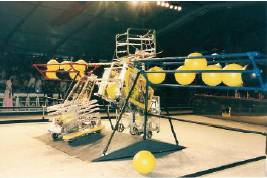 CO-OPERTITION™ is a conjunction of cooperation and competition and calls for four-team alliances whose robots worked the field cooperatively to maximize a score we all share at the end of the match. No defense, just cooperation.

The competition is composed of two phases: Qualification Matches and Elimination Matches. Teams will be paired together to form alliances. An alliance will work together to try to win a match. Alliances will win or loose as a single unit, and any points and/or victories will apply equally to both teams within an alliance.

PHASE II: ELIMINATION MATCHES
Prior to the start of elimination matches, each of the top eight qualifying teams at any one of the Regional Events and top sixteen at the National Championship, will select an ally from the remaining teams. If one of the top seeds selects another seeded team as an alliance partner, the team with the next highest qualifying points becomes seeded until all alliances have been formed. Once these alliances have been formed, each of them will again pick from the remaining teams, a third to serve as their alternate alliance partner. The alliances formed at this stage will stay together for the remainder of the elimination matches, which will be a best 2-of-3 series to determine the winning alliance.


During a match, each alliance scores points by placing balls in their goal, and by positioning their robots in designated areas at the end of each match. Each alliance will compete using two (2) team-built robots, four (4) robot operators, two (2) human players, and four (4) coaches. The Ball is a textured rubber playground ball that is approximately 13-inches in diameter. There are two 6-foot high, fixed goal structures located mid-field. Each alliance has its own color coded goal. Under each goal is a 30-inch high clearance bar, which robots may pass under to access the opposite end of the field. Connecting the two goals in the center of the field is an 8-foot wide carpeted ramp, which the robots may also use to access the opposite end of the field. This section has a 5-foot high clearance bar that robots may hang from to acquire points. At the end of a match, robot position on the ramp may also generate additional points. Information on construction of the playing field and ramp are included in the field parts list documentation which is supplied with the manual at the Kick-Off Workshop. The robots will compete within the bounds of the playing field, while the human players will be located at stations just outside the playing field. Only human players and robots may score points with the balls. Each match will last two minutes. In order to win a match, an alliance must score more points than the other alliance.


At the start of each match, each alliance station will contain seven (7) yellow balls and one (1) black ball. Fifteen (15) yellow balls and two (2) black balls will be located at the far end of the playing field. All balls may be used to score points by either alliance. 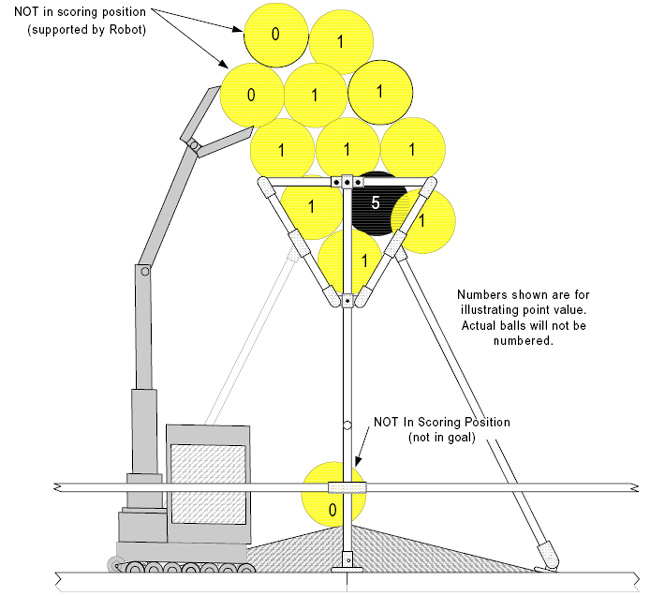 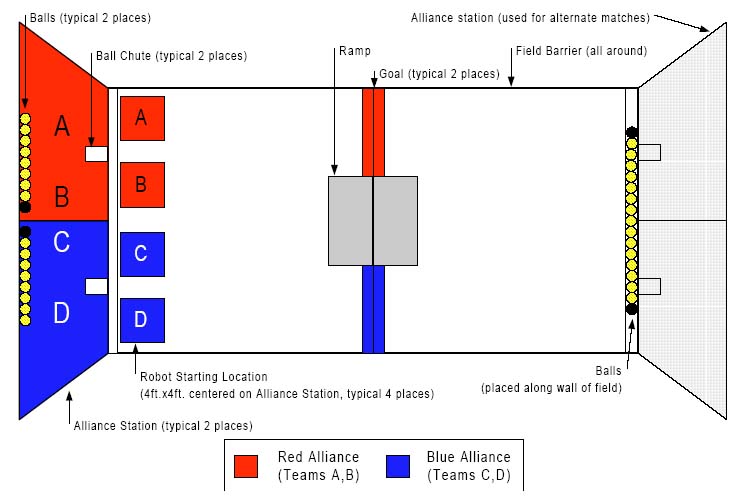