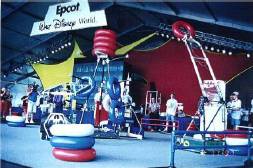 Over 150 schools, companies, and universities from all across the United States built "robo-gladiators" to compete in the 1997 FIRST Robotics Competition.


The playing field is a carpeted, hexagon-shaped area with a central goal. Around the perimeter of the field are three stations for human players, who work with remote controlled robots on the field to score points. At the start of each match, each team has 3 colored inner tubes at their player station and six tubes on the field, located in stacks distributed evenly around the goal.


The robots were designed and built by the school/engineering teams during a six week period and were constructed from a wide range of materials including aluminum, fiberglass, plywood, PVC pipe, and structural foam. Each robot can weigh up to 120 pounds, and must start each match small enough to fit inside a 3' x 3' x 4' space. The robots are powered by two Skil 12 volt rechargeable batteries and use motors from Skil, Delco, and Delphi Interior and Lighting, speed controllers from Tekin, pumps from McCord Winn Textron, air cylinders and valves from Numatics, Inc., and a programmable control system supplied by FIRST. Drivers use joysticks from CH Products and switches from Honeywell to remotely control the robots via a radio link which uses RNet wireless modems from Motorola.


In two minute matches, the three robots and human players score points by placing the inner tubes onto pegs on the goal, or around the top of the goal. The tubes are color-coded to identify team ownership. Human players are not allowed onto the field, but they may hand tubes to the robots or throw tubes directly onto the goal. At the end of the match, each tube on the goal is worth one point. Each tube on the top of the goal will double a team's score. In addition, each vertical row of three tubes on a corner of the goal will double a team's score. The winner of the match is the team with the highest score. In the event of a tie, the team with the highest tube in a scoring position wins.