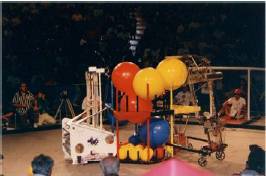 More than 90 schools and engineering companies from over 20 states built "robo-gladiators" to compete in the 1996 FIRST Robotics Competition, HEXAGON HAVOC™.

The playing field was a carpeted, hexagon-shaped area with a central goal. Around the perimeter of the field were three stations for human players, who worked with the remote controlled robots on the field to score points. There were twelve 8" diameter balls and two 24" diameter balls per team, color coded to identify team ownership. At the start of each match, all of the small balls and three of the large balls are on the playing field, while the other three large balls are situated on the triangular corners of the goal.


The robots were designed and built by the school/engineering teams during a seven week period and were constructed from a wide range of materials including PVC pipe, aluminum, plywood, fiberglass, and structural foam. Each robot had to weigh no more than 120 pounds and fit, unconstrained, inside a 36" cube. The robots used two 12 volt Milwaukee drill motors, four Delco car seat motors, and two Textron pneumatic pumps which, through a customized remote control system, were powered by two 12 volt Milwaukee Drill batteries. 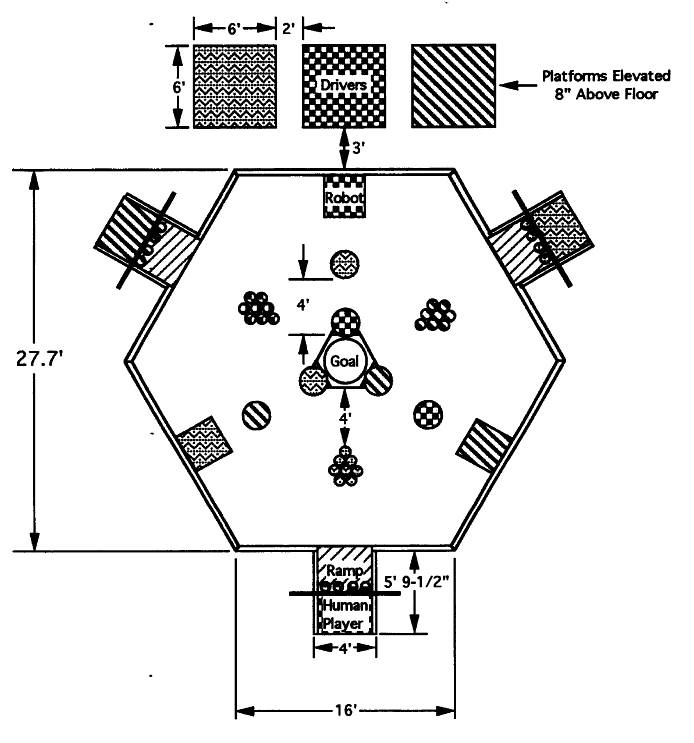