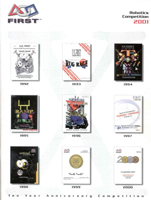 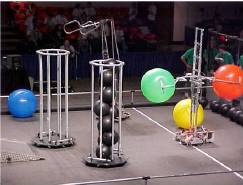 DIABOLICAL DYNAMICS™ is a cooperative game rather than a head-to-head competitive one. An alliance of four teams/robots scores by getting balls into goals, by having each robot in the End Zone at the end of the match, and by balancing the goals on a teter-totter bridge at the end of the match. The alliance has several interesting options, such as, ending the match prior to the two minute time limit for a bonus or transporting an inoperable robot across the field using a stretcher to the End Zone.

The competition is composed of two phases: Qualification Matches and Elimination Matches. In each match, four teams work together as an alliance to try to achieve as high a score as possible. All teams in an alliance share the alliance score. However, during the qualification matches some teams may earn additional bonus points that apply only to their team.

Points: During a match, the alliance scores points by:

Each alliance competes using four (4) team-built robots, twelve (12) students, and eight (8) mentors. There are forty (40) small balls, approximately thirteen (13) inches in diameter. There are four (4) balls approximately thirty (30) inches in diameter. There are two(2) seven (7)-foot high goals with caster wheels around the bases that may be moved around the playing field. One goal starts near the Start Zone, the other starts near the End Zone. Dividing the field in half is an eighteen (18)-inch high railing with a central bridge. Robots may pass over the bridge or rails to access the opposite end of the field. The bridge is centrally supported on a beam approximately six (6)-inches wide, such that it may tilt toward either end or remain level.
The robots must compete within the bounds of the playing field, while the students are located at stations just outside the playing field. Only students and robots may score points with the balls.

At the start of each match, the alliance station contains twenty (20) small balls. Twenty (20) small balls and four (4) large balls will be located at the far end of the playing field. All balls may be used to score points. Teams may opt to use a stretcher, on which a robot may be conveyed around the field. If the stretcher is used, it must start in the same position as the robot on the stretcher would normally start.

At the end of each match, points are awarded as outlined below.
a) The alliance receives:
b) A team multiplies its score by 1.1 if its large ball is on top of a goal.
c) Scores are rounded up to the nearest whole point after applying all applicable multipliers. 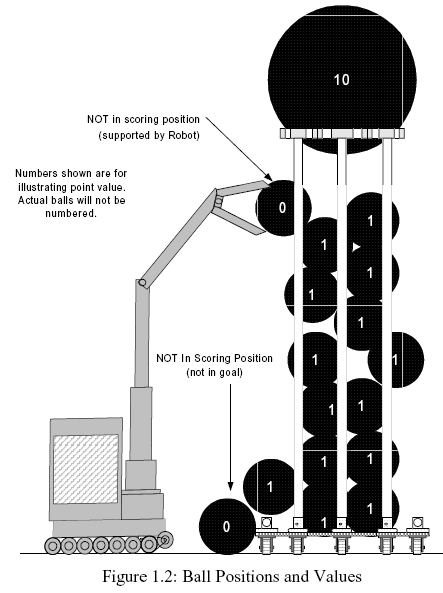 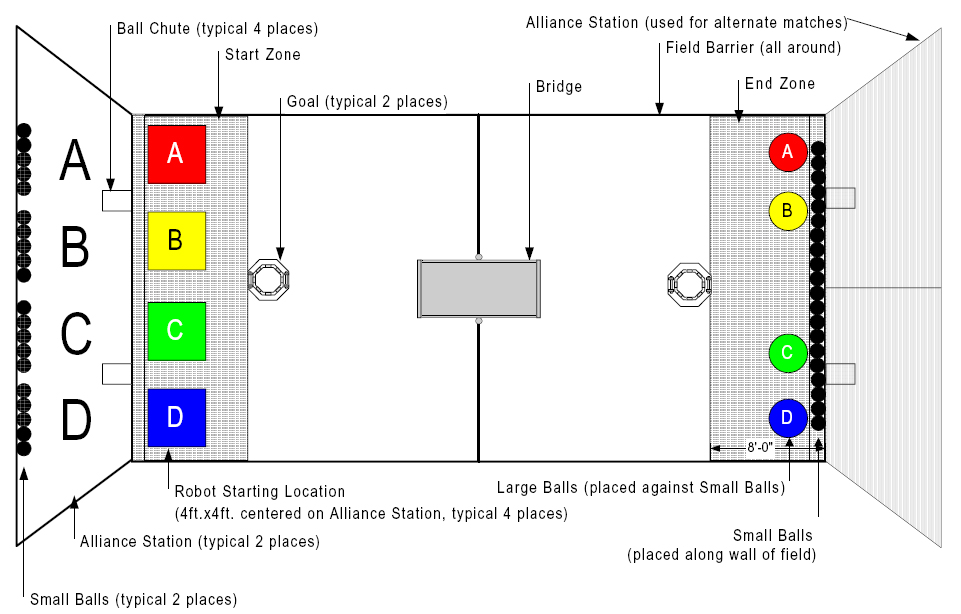