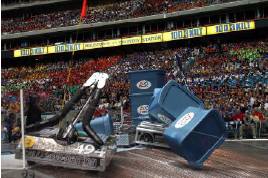 The 2003 Game - STACK ATTACK™ - is played on a 54-foot long by 24-foot wide playing field. A 2-foot high platform that is 4-feet wide by 12-feet long is located across the center of the field. The platform is accessable from each of its long sides by ramps that are 8 feet long. Two alliances of two teams each compete in each match. Each team consists of a human player, two driver/operators, and a coach. A match consists of a 10-second Human Player Period, a 15-second Autonomous Control Period, and a 1 minute and 45 second Remote Control Period.

The object of the game is to acquire and stack plastic storage containers that are initially located on the platform or placed on the playing field by human players. Each alliance must place containers in a scoring zone on its own side of the field to score points. The total number of points earned depends on the count of containers located in each alliances scoring zone multiplied by the number of containers in their highest stack. Additional points are awarded for any robot that is positioned on the top of the platform at the end of the match.
If a robot is inoperable and unable to compete in a match, in order for that team to obtain a score, at least one member of the team must be in the teams driver station during the match. This team member may be the human player.


At the start of each match, 29 containers will be stacked in 5 tiers in a line across the top of the platform.
The platform container stacks will be located approximately 3 inches apart and centered across the platform.
Robots will initially be placed within the starting areas in the alleys at the sides of the platform/ramp structure. Each alliances robots will start on the far side of the midfield barrier. Each alliance will have 2 human players (1 from each team) positioned outside each of the two gates at their end of the playing field. Each human player will have 4 containers stacked near him or her. The remaining 2 players and a coach from each team must stand in their driver station.


Upon completion of the 15-second autonomous robot control period, the driver station controls will automatically be activated. Team members will remotely control and operate their robots for the remaining 1 minute and 45 seconds of the match. Power will be automatically shut off at the conclusion of this period.


Robots try to acquire and stack (right-side up, upside down, on their side, etc.) as many containers as possible in their alliances scoring zone. The gray carpet alleys at the side of the platform/ramp structure and the gray carpet areas directly in front of each end of the playing field are No Score areas, i.e., not in the scoring zone.


All containers within the alliances scoring zone will be worth one point each EXCEPT the containers in the tallest stack. The total number of one-point containers will determine the base score for the alliance. The tallest stack of containers within the scoring zone is the multiplier stack. Containers in the multiplier stack are worth zero points each (note that containers in other stacks of the same height are worth one point each). The total base score is then multiplied by the height in whole Stack Height Units (SHU) of the multiplier stack. A whole Stack Height Unit (15-1/4 inches) is the height of an individual container as it sits flat on its bottom. More than one stack of the same height does not affect the multiplier. Whole Stack Height Units will be measured with an Official Stack Height Measuring device.
An additional 25 points will be awarded to each robot that is touching only the top of the platform at the end of the match.
Both teams in the losing alliance get their own alliance score in Qualifying Points (QPs). Both teams in the winning alliance get their own score plus twice the losing alliances score in QP's. A tie awards the total of the match points to both alliances in QP's.